Campo di concentramento per Prigionieri di Guerra no. 52 Pian di Coreglia - known to the International Red Cross Committee and to the servicemen who were interned there as PG 52 Chiavari - lay in the Valfontebuona in the Comune of Coreglia Ligure near to the small settlement of Calvari.  It was, and still is,  known by this latter name locally.

It lay inside a meander in the flood plain of the River Lavagna, with the river to the north east and with hills rising steeply to the south west. The black square on the 1943 map above shows its exact location and its position in relation to Chiavari can be seen on the map below: 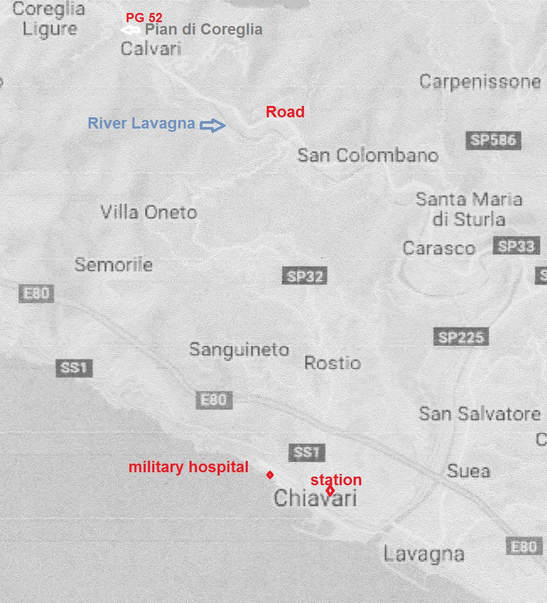 Corelia Ligure is located in the Italian Province of Genova (Genoa in English)  in the region of Liguria, fourteen kilometres inland from the resort of Chiavari and the main west coast railway line from Rome to Genova and the French border. 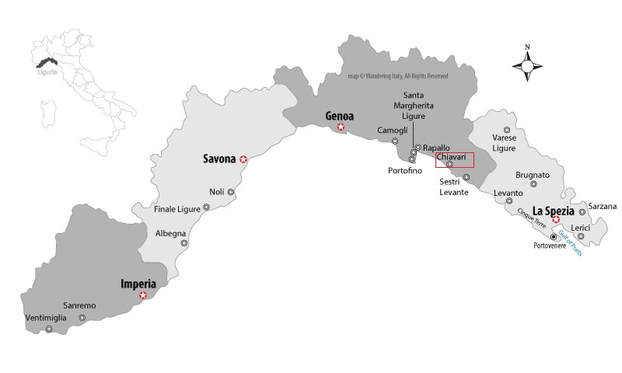 Map to show the position of Liguria and Chiavari
Here is a photograph of the Valfontebuona looking south-east, showing the site of the camp, of which nothing remains today.
The original photograph is the work of Davide Papalini 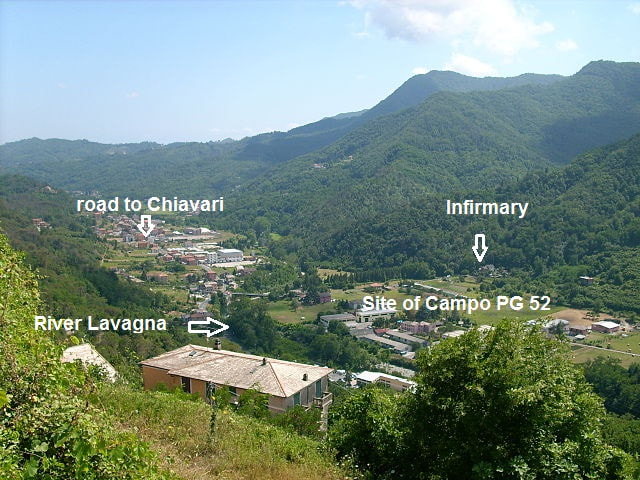 The camp was divided into sectors with a total of 44 wooden barracks; each hut had a double layered masonite roof and cavity walls, and was raised off the ground by about 50 cm. The largest building in the camp was of stone, and contained the kitchen, the refectory, a library, meeting rooms, a chapel, a theatre and a shop.

Separate from the camp, at a slightly higher altitude about 350 metres from the barracks, there was the infirmary, set up in the country house of the Marquises Marana of Chiavari. It was run by some Italian doctors and nurses working alongside medical staff from among the prisoners.

The camp was accessed by a wooden walkway across the stream and almost in front of the bridge stood the building which formed the camp headquarters. The location of the camp, between the river and the hillside, meant that it could be easily controlled: there was a triple barbed wire fence, a lighting system and four watchtowers manned by guards. At the entrance gate and outside the wire, there were armed control units which were also required to control the weapons depot to the right of the entrance...

FROM: Giorgio 'Getto' Viarengo “Documenti per una storia del fascismo nel circondario di Chiavari” (The history of Fascism in Chiavari as recorded in contemporary documents) reproduced in a book and on a website about the Caserma di Caperana – the Signals Academy at Caperana, Chiavari 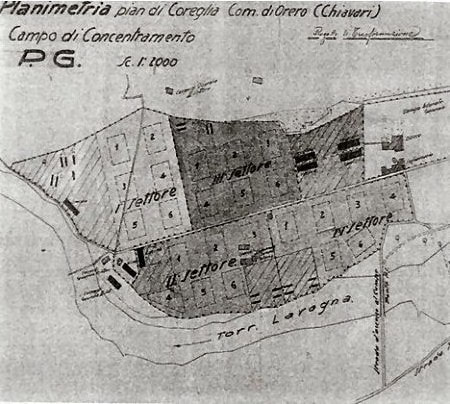